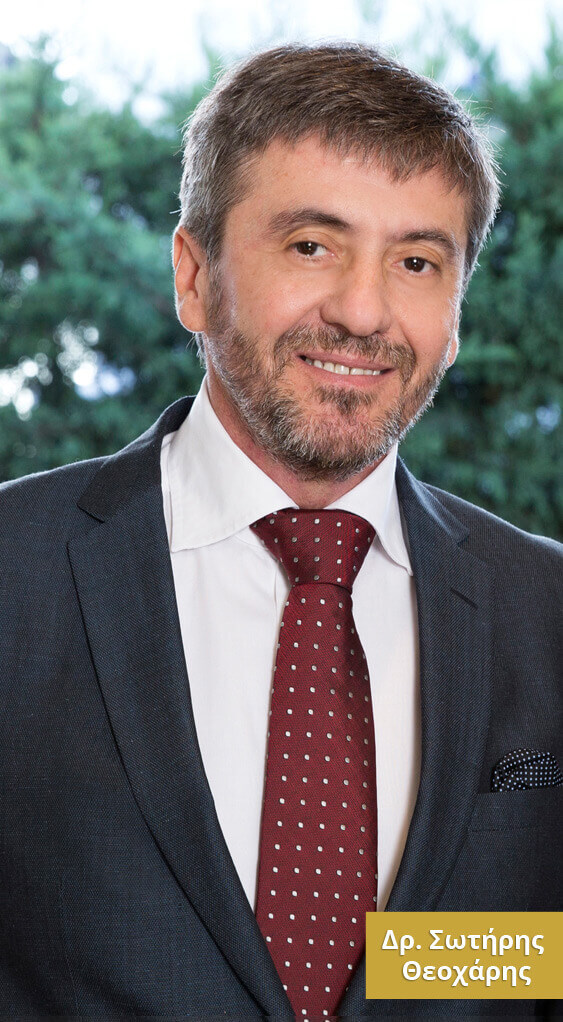 Dr. Theocharis graduated, in 1986, with a Medical Degree from the Aristotle University of Thessaloniki and the Military School of Combat Support Officers (SSAS ARMY).

The same year, he was offered a training position in General Medicine at 251 General Air Forces Hospital of Greece. (1986-1987), while a year later he completed his training in Aviation Medicine at the Aviation Medicine Center (1987- 1988). The following year, in 1988, he continued his 2-year surgery training in the 2nd Surgery Clinic of Athens University. At the beginning of 1990, he completed his training in Pathology, which lasted, over a year, in the department of Pathology in 251 General Air Forces Hospital.

In 1991, Dr. Theocharis trained in Dermatology and Venereology at the University Hospital A.Syrgos, while 3 years later, in 1994 he obtained his medical specialty as a Dermatologist and Venereologist, with immediate effect. The same year, he was appointed Medical Supervisor and Managing Director of 251 Dermatology Clinic. In 2006, he voluntarily retired from the Air Forces Hospital, with the title of Colonel Doctor.

From 1994 until 2007, Dr. Theocharis owned a private medical office for Dermatology and Venereology.

In 2008, he established the world class dermatology clinic SKIN AND HAIR MEDICAL CARE, and in 2011 the medical center LASERMEDICAL SA which he runs until today.

Dr. Theocharis is truly considered a pioneer doctor for all Laser applications, aesthetic medicine, Dermoscopy and Dermatological Surgery. He is one of the leaders in Dermatology in Greece. Among the top in hair transplantation and hair conditions’ treatment.

He has participated in a large number of conferences in many countries, as a speaker - chairman, course director and trainer. In addition to this, his important scientific work consisting of articles and papers has been published in numerous medical journals, in Greece and abroad.